I’m calling it:  Jack Layton has jumped the shark.

OK … maybe many others have called it earlier (if even by a few days), but there’s no going back from the mess that Jack Layton has created for himself and I’m going to pile on to that point of view.

Suggesting that the NDP can’t be blamed for the death of the gun registry is akin to saying that your heart doesn’t help your blood flow.

For those of you looking for a solution to the Gun Registry situation, Scott Tribe posts a compromise recommendation for Jack and Michael to consider. 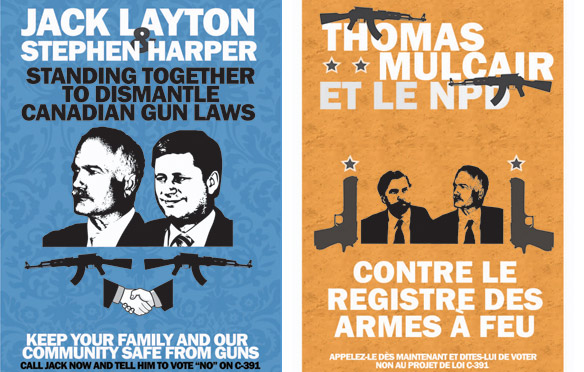 However, I am concerned that Jack will continue to play games with Stevie as opposed to creating real solutions that all Canadians will be proud of.

The image above reminds us that Jack Layton has been working to keep Stephen Harper in power for some time, not just as a result of the gun registry, but ever since he got bluffed by Stephen Harper into making a grab for a few more seats in 2006 and helped defeat Paul Martin’s Liberal government.

(NOTE:  For the record, I am not a Liberal or an NDPer.  I’m lost as far as who I would trust to earn my vote.)

As Jack Layton or members of the NDP continue to prop up the Conservatives, it’s becoming more and more apparent that the ‘socialists’ are just henchmen for the Cons.

Failing to differentiate the NDP from the most right-wing organization in Canada is a massive error and will cost the NDP dearly, both in terms of financial and voter support.  Their efforts to find concession will result in the Liberals being seen as Canada’s only progressive option.

Jack and Michael need to work together to defeat the Conservatives at every turn before the DNA of this country is turned to mush (although it may be too late for that).  They should figure out every possible political angle they can to maximize the number of seats that they can get in the next election, including the removal of candidates in key ridings.

If Jack fails on this, the urban population will dump the dippers in droves and the NDP will be caput.

If the NDP survives this, there should be a leadership review for the NDP, but we know that will be pointless because the NDP is run by the unions and individual members will be shut out.

As such, the NDP is done as a party in Canada.

The Liberals know it and they’re distancing themselves in a big way from the NDP politically and likely in the polls as well.

All of this brings us back to why Stephen Harper will be in control for a very long time.  The Liberals and NDP refuse to play nice and bring the government down.  They are sworn enemies and will do anything to avoid concession, including returning democracy to Canadians.

Because Jack and Mikey won’t be able to play nice, we’ll all be screwed by Stevie.