The leader that proposes to address prices in Canada during the election campaign will win the election.

That’s prices of everything.

Here’s why:  Canadians are getting screwed.

As the value of our dollar rises compared to other currencies, particularly that of the US dollar, the cost of imports should be decreasing.  It’s a simple inverse relationship:  the more valuable our dollar, the more you can buy with the dollar.

As a refresh, here’s a chart showing the value of the Canadian dollar compared to the US dollar: 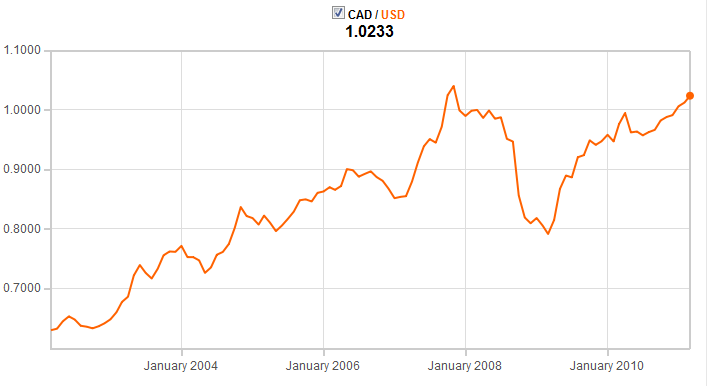 Since 2002, the Canadian dollar has appreciated roughly 63%, from a low of about 63 cents to a high of roughly 104 cents (compared to the US dollar).

Despite this massive increase in value, prices have not dropped in a similar and inverse manner.  Of course, not all of our import/export relationship is related to US goods, but the fact is this:  the US accounts for roughly 50% of all imports into Canada.

In fact, the price for basic commodities – gas, food, etc – have increased 50% or more over the last few years.  According to the latest CPI figures, the price of gas has increased 18.3% since last March.

Again, Canadians are getting screwed.

Students, seniors, lower income groups and even the elite that Stephen Harper is courting – those few people that will enjoy tax breaks way off in the future – are paying higher prices RIGHT NOW.  An 18% increase in gas represents an 18% increase in taxes and yet no one is crying for the head of the Prime Minister like they do if the price of their Timbits rises $0.02 when the HST is implemented.

It’s slowly sinking in and Canadians are catching on to the idea that we’re getting hosed, but a wise leader would make this an issue sooner rather than later and attack these price increases.

The first step would be to promise an investigation into gas prices, followed by questions like why Canadians have to pay anywhere from $10,000 to $15,000 more for a Honda in Canada compared to the US when it’s made in Alliston and is exactly the same.