Detroit: Out of Gas or Out of Mind?

Mass media has distracted us from the heart of the matter related to the Detroit bankruptcy.

The oil giants won’t allow it.

Therefore, there’s more to the picture than the mass media is presenting.

Detroit’s place in the world as an auto giant and home to cars faded long ago when protectionist barriers were placed against fuel-efficient, small, affordable, reliable, dependable, long-lasting cars from Asia, particularly Japan.

But that’s a whole other story …

What I want to address here is the menace of what many will know of in the future as the first corporate buyout of note of a governing body.

When any agency or organization declares bankruptcy, the assets are immediately assigned to the creditors.  In the case of Detroit, this amounts to corporate lenders and not the public.

What’s happening in Detroit is that all of the public assets – particularly the pensions of public employees – are being looted by bankers and lenders, with nothing left for the public of Detroit. 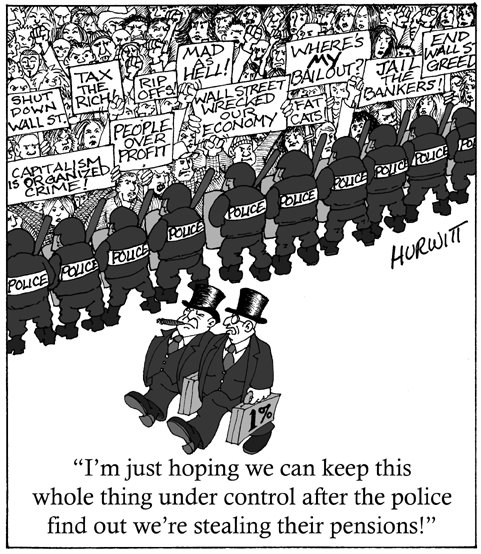 While the picture says it all, we have to remind ourselves that we’re still in the early stages where ‘THEY’ are using police as protection while they pilfer public pensions, assets and other sources of economic value.  Including those of police forces and retirees.

Eventually, the public of Detroit, particularly those that are retired or who are close to retirement, will either discover that the cupboard is bare or be foreclosed on before they can even go to their cupboards.

People in their 60s and 70s will be starving on the street and poverty will climb to new heights.  The human suffering will be enormous.

A likely scenario is that police of any age will likely join mercenary forces that will pay them well to protect the owners of Detroit, but who will beat and abuse those who are the victims of this corporate buyout.

It’s entirely possible that within a few years, we’ll all be suffering the same fate, as public pensions – covenants that governments made decades ago with firemen, police officers, doctors, teachers, ombudsmen, councillors and so on – become the first economic assets to be attacked and pillaged in these corporate leveraged buyouts of our governments.

Unfortunately, we have run out of time to protect ourselves from the ‘corporatocracy’ that will enslave us all.

‘Robocop’ was a little too prescient in its prediction of the fate of all North American cities.

Is there a solution?  Maybe, but it’ll take a lot of political will power to make it happen.

People in North America need to demand that their pensions be identified as personal accounts and not something to go into a massive pool of reserves, only to be taken by lenders in exchange for interest outstanding.

Simply put, this means we should be given the right to put our pension in our own name.  It would be transferable to any organization we work for and be available when we hit a certain age.  The liability of pensions would no longer be carried on the books of thousands of companies around the world, but on our own bank and personal financial statement.  Some restrictions would have to apply to what we could invest in.  I would ban options and futures from Personal Pensions, but what do I know?

Another more radical option is to look at ways we can default intentionally on loans collectively and on a massive basis so that the debt collectors and their thugs won’t have anything to take.  This is fantasy, but worth putting on the table nonetheless.

If we don’t engage in serious discussion about the debts our governments have created, expect a LOT of wealth to be wiped from the books and transferred from us to THEM.