Which ‘News’ is Which?

Many of us have seen this image: 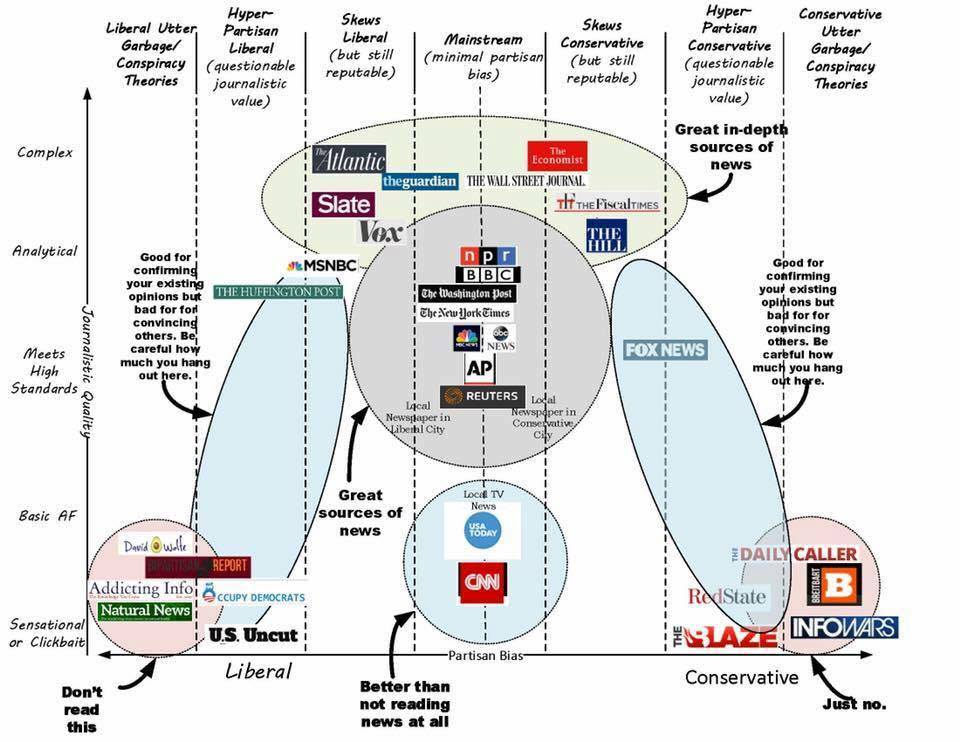 It would be an amazing guide to news and information in the 21st century.

If only it were true.

First, the most blatant irony is that it’s a commentary on written news media that can only be found on a site that focuses exclusively on content.

Next, the sources deemed ‘minimal partisan bias’ are actually LOADED with bias.  Here’s an example:  Monsanto pays to post a story to Associated Press (AP) for distribution to other news sources.

The Associated Press presents itself as a non-profit cooperative, but it’s organizing members and senior staff are owners and members of for-profit publishing companies.  For example, Gary Pruitt is the current President and CEO of AP.  His previous position was CEO, President and Chairman of McLatchy Company, a publicly-traded publishing company that operates 29 newspapers and other publications in 14 US states.

The Canadian equivalent is the Canadian Press.  Articles and visibility in the press are essentially bought by the highest bidders.

Even though there’s an ‘arms’ length’ situation that exists between publishers and publishing source, Monsanto is still able to post an article that’s designed to make us feel good about GMOs.

Is it thoroughly researched before being published?  Maybe.  But unlikely.

And if it is and it gets rejected?  What happens to the millions that Monsanto spend on advertising on a regular basis?  Do they pull the ads when the articles they want don’t get posted?  Or do they acknowledge the ‘invisible wall’ that’s supposed to exist between editorial content and advertisers?

Seriously people.  For a long, long time, this is the way it’s been.

And what happens when you have a tool like the Internet come along where people can discuss context of the content, question ‘who benefits’ (as the ancient Romans taught us to do) and start to investigate the ‘reality’ themselves to ensure that they’re not being duped by the 1%ers?

On the last point, there are now thousands, if not millions, of web sites of varying degrees of quality that are available now for exchanging ideas and scrutinizing the tripe that’s being dumped on us by the corporate-media-driven, industrial-military complex that we were warned about so many decades ago.

We’re only just beginning to understand that we now have the tools to create our own stories.

This is a LONG shot from being FAKE.  This is our lives.  It’s real.  And it’s being recorded for our benefit.

As Trump and his team makes us questions what’s real vs fake, let’s not forget that a good chunk of his wealth is based on deception.  Casinos lull us into believing that we can get rich quick by dumping a quarter or two into a slot machine.  ‘Reality’ TV shows are anything but, filling time on air to give advertisers lots of opportunities to shout at us.  Political campaigns that create boogeymen out of tax-paying, hard-working American citizens.

Trying to understand the difference between real and fake news?

Start by not taking anything for granted and do some research yourself.