Trump To Spend NATO Into Oblivion

Donald Trump has announced that he will increase ‘defense’ spending by an unprecedented (and unwarranted) $54 billion over the next year.

This is in addition to the roughly $600 BILLION spent per year on military and defense infrastructure.  This is also a conservative number, as many additional billions are spent on defense or security related programs.

Where does it all go?

No one really knows.

And why does the US feel it has to continue to outspend everyone?

These excessive levels – if we allow them to continue – will result in bankrupting NATO. 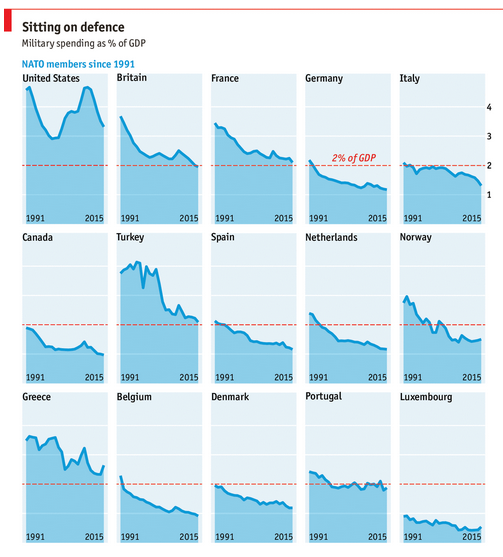 Members will simply declare that they can no longer afford to support Trump’s ridiculous overspending on military hardware and contracting.

And when that happens, he’ll have all the justification he needs to terminate relations with NATO countries, putting the world on full alert.

Assuming threats exist (as we’ve been told since the introduction of personal income tax back at the beginning of the 20th century) and they’re not just manufactured to ensure that the big spend on military continues, we’ll see ex-NATO members fall to bullying brought on by either the US, Russia or both.

There is an alternative:  if the US were to pull its defense spending to be more in line with the rest of NATO as opposed to pushing NATO members to keeping upping the ante, we’d have trillions of dollars to spend on more important things.

If you know of organizations that are making a legitimate impact with respect to pushing for reductions in military, security and defence spending, please share the links in the comments below.