This article captures my sentiment right now about Andrew Scheer.

Yesterday’s TERRORIST attack in New Zealand on Muslim people in their house of faith is a despicable act.

Not acknowledging it as a terrorist attack is even more vile.

Andrew Scheer and his Yellow Jacket Neon Nazi friends continue to show their pathetic disdain for entire segments of our society.

The Anti-Racist Canada site tracked a number of the comments that flooded the Yellow Vest Canada stream. It’s sickening. 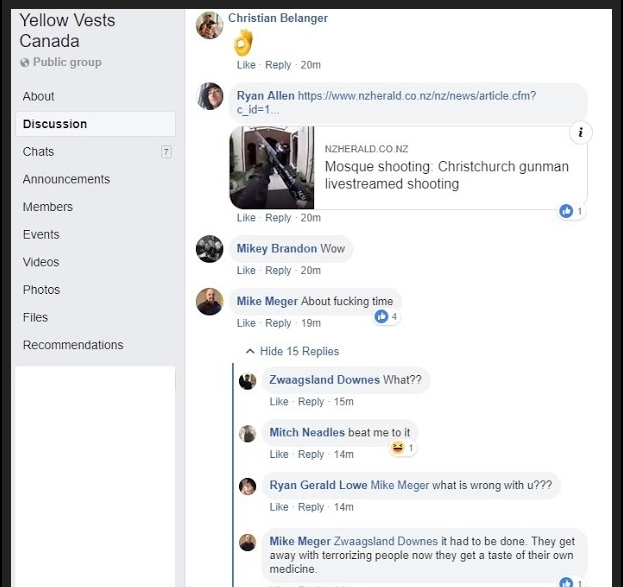 But just a few weeks ago, there was Andrew Scheer – leader of Canada’s Conservative Party – backing up the Yellow Vest Neon Nazis at a rally in Ottawa. He knowingly supported the ‘United We Roll’ protest, a thinly veiled program organized by the Yellow Vests. A protest rally that included known Nazis like Faith Goldy, who want a return to white privilege.

I’m not a big fan of the Prime Minister and all the bullshit that’s coming to light daily from his office, but given Scheer’s support for this group, perhaps the leadership of Canada should turn the tables and be calling for Scheer’s resignation.

Association with these groups invites VERY treacherous times upon ALL Canadians.

Also, in this light, any support for this kind of vocal demand for the death to members of our society, including our democratically elected leader, should be seriously questioned. If you’re a Conservative, what are you doing to remove this madness from your party?

And the CBC: shame on you. Not calling out Scheer and his support for the Yellow Vests and other racist movements is an embarrassment to us all and enables this behaviour.