I snapped this quote the other day and wanted to share it: 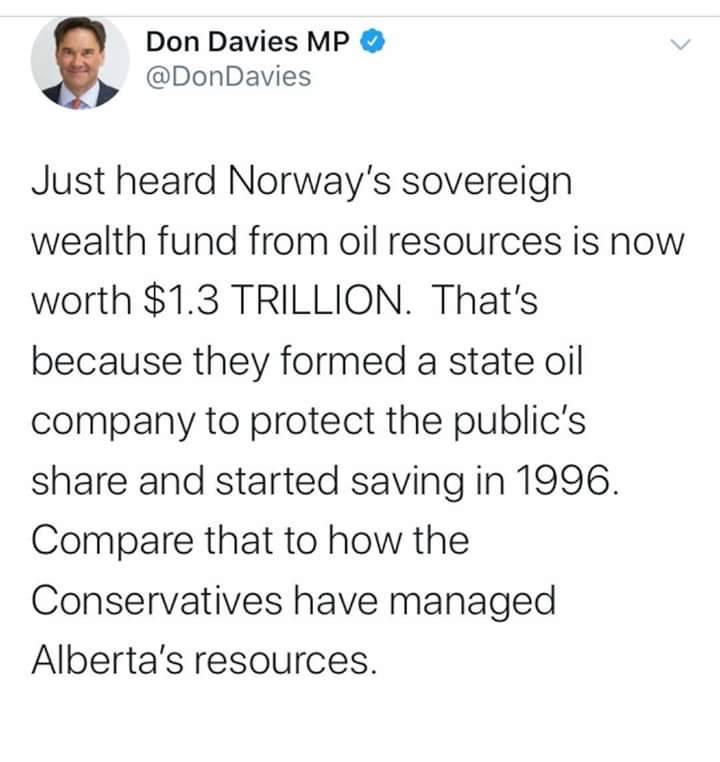 I’m putting this here for a LOT of reasons. $1.3 trillion reasons.

That’s right: the Government Pension Fund of Norway is worth $1.3 trillion and is moving on from oil-based investments.

1.3 trillion reasons why anti-Canadians like Jason Kenney, Scott Moe, Andrew Scheer and other Conservatives are content to stick their heads in the sand and ignore global issues associated with dirty oil.

1.3 trillion reasons why no one wants your dirty shitumen.  (Get it? Shitty bitumen? I mean, if you can do it with western exit, I can do it with something that’s a more realistic reflection of reality.)

1.3 trillion reasons why blaming Ontario and Quebec for your lack of diversification and lack is not a good idea and why people in the east of Canada don’t think dumping hard-earned tax dollars into pipelines is a good idea.

1.3 trillion reasons why 40 years of Conservatives is destroying your province, dig by dig doesn’t justify blaming the ‘blip-in-time’ NDP government, Trudeau or anyone other than yourselves.

1.3 trillion reasons why the future is not based on carbon production.

1.3 trillion reasons why we ALL need to look beyond OUR shitumen resource base and start some serious planning for Canada’s future.

C’mon Cons: even zeros like you should be able to recognize something on the positive side of ledger.

PS be careful what you wish for with exit from Canada threats. 100% of lands in Manitoba, Alberta, Saskatchewan and even BC are based FIRST on treaty agreements with Canada’s First Nations people that were signed BEFORE these provinces joined Confederation. Separation would legally nullify your existence as provinces and put 100% of the power into the hands of the people that should have it: Canada’s First Nations people.