I’m going to start with Alberta and particularly, Jason Kenney, for taking claim to the April Fool award by proceeding in two ridiculous directions:

Alberta is a failed state. They won’t be able to implement a sales tax to pay for their basics and they certainly won’t be able to back out of the reductions in taxes, royalties and other financial benefits of extracting bitumen or other resources in their province.

Jason Kenney is really just the peak of a long line of absurdity afflicting Alberta, following in the path of decades of mismanagement and waste.

Albertans that opposed the first Trudeau and suggestions of nationalizing oil like other smart countries did (Saudi Arabia, Russia, Norway, etc) are now feeling the sting of lots of cost without any source of revenue.

They’ll continue to cut without a plan for the future. I have friends who live there and I’m starting to feel bad for them because the Canada’s Titanic is sinking.

Capitalists make great socialists when they lose a week of cash flow. They bitch and moan about people on the street not taking jobs because wages aren’t high enough or how new moms need to get back to work because maternity (or parental) leave is too generous.

But cut off the cash flow and capitalist cry babies are the first ones shoving everyone else out of the line for government and public funds.

Consider the absurd $2 TRILLION dollar handout that’s just been approved by the Trump Admin and that will start lining the pockets of billionaires everywhere.

Meanwhile, the rest of the world is descending into Martial Law. No one is calling out our governments as they clamp down on ‘hazardous’ activities.

This is a very sad moment for all humanity.

Hungary seems to be the most extreme example, with absolute rule brought about by decree and termination of the Parliament, pretty much indefinitely. The EU or other governments have yet to respond to the situation, not inspiring a lot of confidence about their intent for the rest of us.

The rule of law still exists in Canada, but for how long? Snitches are everywhere, people out for a walk are being outed on social media and our governments are instituting massive fines for breach of state of emergency requirements. Even Washington, DC is in complete shut down. Rumour has it that up to 24,000 Canadian troops are ready to be ordered to enforce self-isolation requirements.

John Tory in Toronto has ‘requested’ people to only leave their homes once a week to get essentials for groceries, etc. How is he going to track this? Are we going to get ID’d every time we go out, with our names going into a database of ‘permission slips’?

For the record, I desparately want to be wrong about all of my concerns, but everything I’m hearing sounds like Martial Law to me. 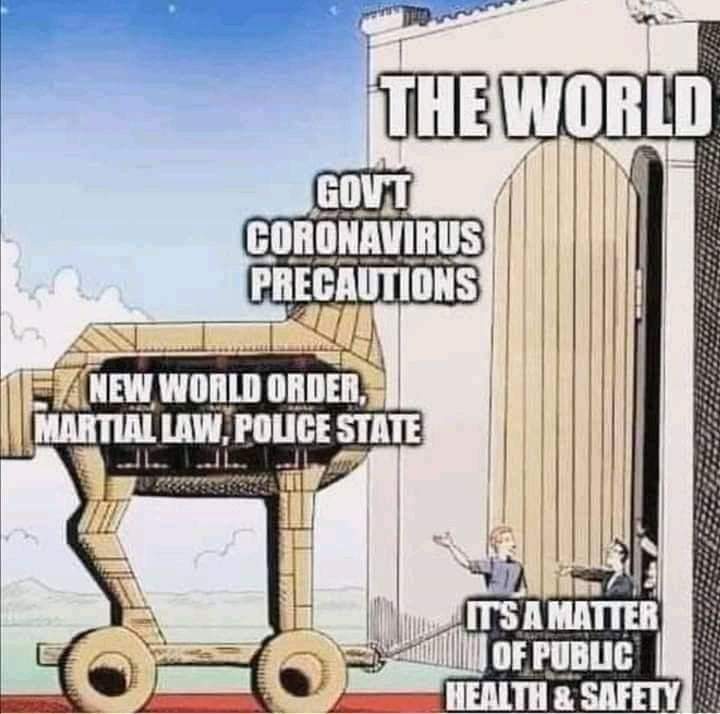 Anyone care to push back amid the climate of fear of Covid? I didn’t think so.

One op-ed with the CBC opened up the question about the balance of civil liberties, our Constitution and emergency response. While the author asked valid questions about the state of affairs, he also did a good job of warming us to the idea that house arrest will be pretty much indefinite from now on.

I think this is going to last until at least June (if it ends), but it’s also going to get very ugly as people struggle to exist within the confines of their homes. Domestic abuse, boredom, alcoholism, health issues like lack of exercise, drug addiction, ageism and other issues will continue onwards without any element of civility.

Thankfully, despite my pessimism, there seems to be brief points of light around us. There’s news of chefs around the world ‘springing into action’ to help people with food delivery, helping farmers and offering online cooking classes. People everywhere are making hand-sewn masks by the thousands for emergency personnel. Most people, generally speaking, are behaving relatively calmly, despite the potential for panic.

The idea of ‘Victory Gardens’ is taking hold around the world, certainly in response to the simple truth that our global food chain is collapsing quickly. You can even take a free Master Gardener course from Oregon State University.

Another cause for hope? MANY people are talking about the future in a VERY positive way. For example, David Suzuki sees this as a very genuine opportunity to point ourselves in a new direction.