In case you’re not with the program yet, we need to use Covid as an excuse to move forward, not ‘back to normal’.

Normal … wasn’t normal. It was destructive and put us on a path of ruin.

Still don’t get it? Try this image … 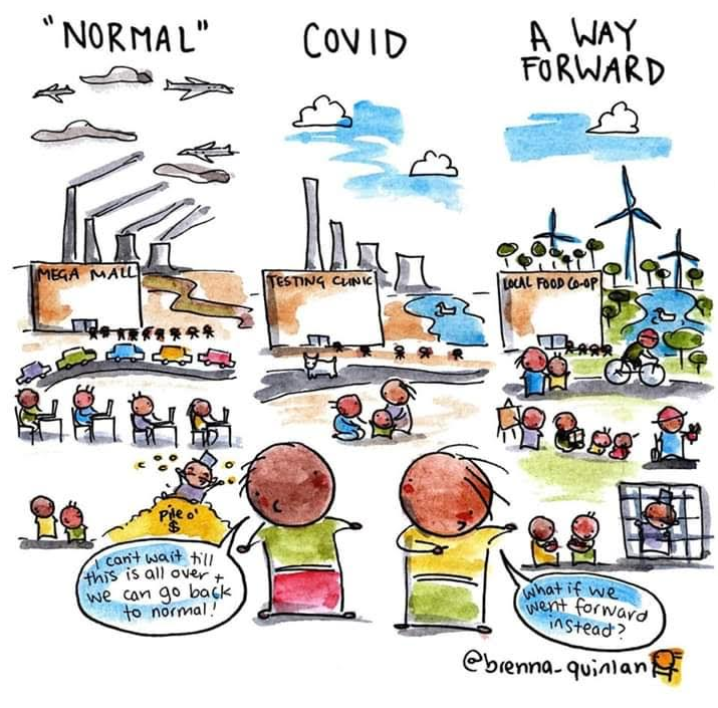 For more ideas on how to move forward with a green economy, check out this article with Passage.com. Oil prices have collapsed and Alberta bitumen will never get a decent return on investment any time in the future. It’s time to clean up and walk away.

The objective of a green stimulus plan would be to mobilize idle production capacity and reach full employment through public financing of projects to replace carbon-emitting aspects of our economy with zero-carbon alternatives.

Nearly 45 per cent of Canada’s CO2 emissions are generated by burning fuel for electricity and heat. These carbon-emitting sources would be replaced by a combination of renewables like wind and solar, backed by always-available hydroelectricity and nuclear (which now, by the way, causes the fewest deaths per kilowatt-hour of any energy source).

Around 28 per cent of our emissions are created by transportation, a sector that can be decarbonized through electric vehicles, better public transit and biking options, and synthetic hydrocarbons for longer-range transportation like aviation and shipping.

The remaining one-fourth of our emissions come mainly from agriculture and industrial processes needed to manufacture steel, glass, cement and other basic materials. These can be reduced through a variety of mechanisms, including more efficient land management practices, reforestation and the roll-out of carbon-free industrial manufacturing technology.

This will all require expanding manufacturing capacity, building new energy projects, enhancing our energy grid, retrofitting existing buildings and industry, and substantial research and development. It’s easy enough to conceive of these changes, but actually implementing them will require vast resources. Fortunately, massive stimulus funded through borrowing and targeted taxes is exactly what we need to get people back to work as quickly as possible after COVID-19.

A basic requirement for Canada would be to keep interest rates around zero. This won’t be much of a problem, given that about 20% of our public is unemployed and that figure may get worse. Inflation won’t be rearing its head any time soon.

New Zealand has already initiated plans to convert to a green(er) economy. They will only be plowing about a billion into renewables and other plans to convert, but it’s a start. Many, many billions more are planned on electric trains, rezoning, changes to building codes and more.

We all just need to get better and getting better requires a green commitment.

Maybe We Should Enlist Tesla/Musk?

He’s not a popular guy, but many people like him more than they like Bezos or Gates.

And he could be a key player with kick-starting Canada’s green economy.

Elon Musk is threatening to pull the plug, so to speak, on Tesla car manufacturing in California.

Since GM has bailed on commitments in Oshawa and other parts of Canada, why don’t we nationalize what’s left there and get Musk to take over operations. He’s part Canadian, he’s making electric cars and we need someone to start hiring unemployed Canadians.

Best Description of Trump So Far

This guy has compiled the best possible description of Trump that I’ve seen to date.

A few things spring to mind. Trump lacks certain qualities which the British traditionally esteem. For instance, he has no class, no charm, no coolness, no credibility, no compassion, no wit, no warmth, no wisdom, no subtlety, no sensitivity, no self-awareness, no humility, no honour and no grace – all qualities, funnily enough, with which his predecessor Mr. Obama was generously blessed. So for us, the stark contrast does rather throw Trump’s limitations into embarrassingly sharp relief.

Plus, we like a laugh. And while Trump may be laughable, he has never once said anything wry, witty or even faintly amusing – not once, ever. I don’t say that rhetorically, I mean it quite literally: not once, not ever. And that fact is particularly disturbing to the British sensibility – for us, to lack humour is almost inhuman. But with Trump, it’s a fact. He doesn’t even seem to understand what a joke is – his idea of a joke is a crass comment, an illiterate insult, a casual act of cruelty.

Trump is a troll. And like all trolls, he is never funny and he never laughs; he only crows or jeers. And scarily, he doesn’t just talk in crude, witless insults – he actually thinks in them. His mind is a simple bot-like algorithm of petty prejudices and knee-jerk nastiness.

There is never any under-layer of irony, complexity, nuance or depth. It’s all surface. Some Americans might see this as refreshingly upfront. Well, we don’t. We see it as having no inner world, no soul. And in Britain we traditionally side with David, not Goliath. All our heroes are plucky underdogs: Robin Hood, Dick Whittington, Oliver Twist. Trump is neither plucky, nor an underdog. He is the exact opposite of that. He’s not even a spoiled rich-boy, or a greedy fat-cat. He’s more a fat white slug. A Jabba the Hutt of privilege.

It goes on. It’s worth the full read.