Somone on Twitter has been tracking Trump’s comments about Covid and matched them up with the number of cases in the United States since February. Things are getting ugly and the chart below CLEARLY reminds us (as if we needed reminding) that America’s greatest challenge is management. 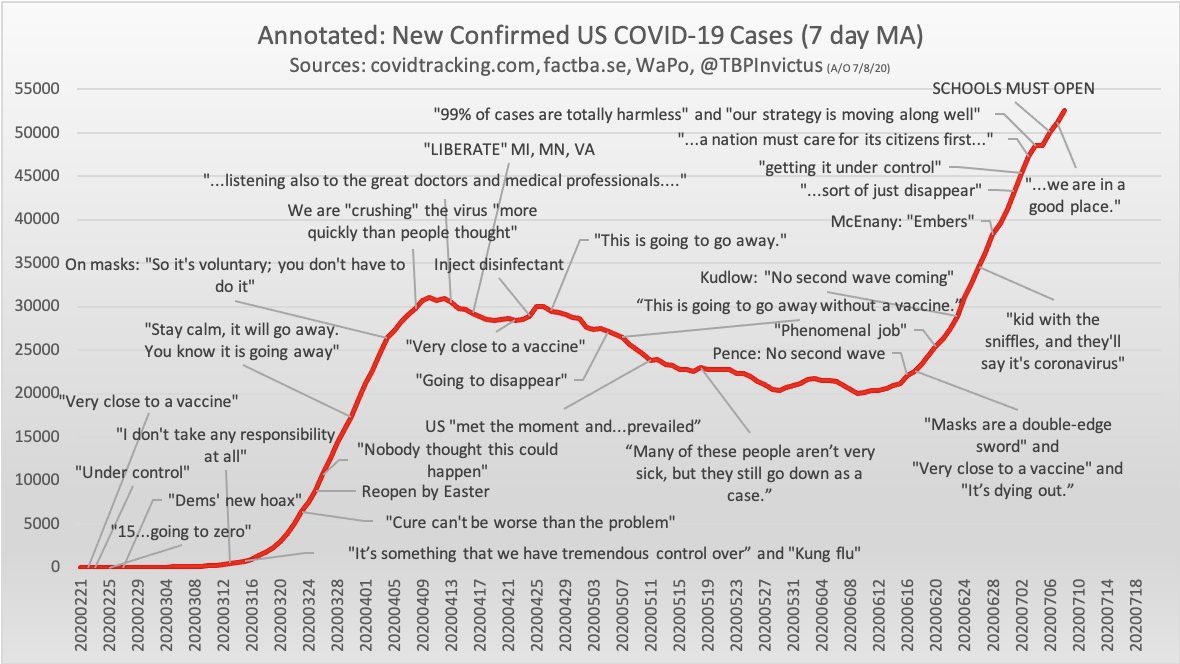 Note that some comments related to getting am ultra-violet enema and drinking Lysol haven’t been added yet.

Around the world, there are some 140+ trials and tests going on related to Covid-19 vaccines and treatments. This is good.

I like to believe that with competition, market forces will ensure that people will be driven by price (ie. lowering it to make it affordable and attractive to governments around the world), selection (ie. maybe the ‘cure for Covid’ will be a pill or medicine as opposed to a vaccine) and quality (ie. testing will be rigourous and infallible).

However (the verbal eraser), what continues to bother me is that we’re placing the fate of humanity into the hands of just a few people.

For profit, dividends and bonuses … not for grace, charity and kindness.

We don’t want this … although it’s comforting to know that some semblance of justice was served.

I actually want a treatment or vaccine more than anything else right now, but I still feel like we (ie. the entire population of the planet) has a right to ask about the path we’re going to take. For the record, this is NOT to be perceived as ‘anti-vax’ rhetoric. This is the future of the planet that we have to decide on and the fate of the people who are more or less willing to proceed with some level of experimentation.

My read: I’ll be first in line but let’s not screw this up and let’s stick to the rules (Nuremberg Code of Medical Ethics, the Declaration of Helsinki, the Belmont Report and the Common Rule).

Here’s another thought that would probably surprise many of you: I would like to see 10 TIMES the number of research activities, trials and testing that’s happening right now, if only to compound the idea that we need to get ourselves back into order sooner rather than later. We need to get our kids back to school. We need to help essential workers ease up on their work flow. We need to return to taking action with  issues that will save the planet. I used to say that the longer we’re cut adrift, the sooner we’ll learn to row, but I don’t know if that’s possible any more without some of the luxuries that  modern science affords us.

For the record, I certainly don’t want to be confused with this kind of support.

And as the US descends into complete chaos, we need to do something before they circle the drain and drag everyone down with them. Don’t forget that the US budget is basically 75% wolf (ie. military) and very little for the rest (us sheep, I suppose), and we all know what happens when a wolf is wounded: it bites before accepting kindness.