Why do the Conservatives insist on keeping up the BS rhetoric and whipping up racist fan bases with ‘Keep Canada White’ slogans?

Erin O’Toole continues down this path, with his ‘Take Canada Back’ nonsense for a slogan.

Back from what? The colonists 400+ years ago? Unload all of the white people from North America and give Canada back to the First Nations people?

Or is it … your slogan is peppered with hidden messages about ‘those people’ that we don’t want to keep letting into Canada? A spin on the ‘old stock Canadians’ bullshit?

Jason Kenney’s ‘Bill 1’ has a lot of people shaking their heads.

Bill 1, or the Critical Infrastructure Defence Act, aims to “protect essential infrastructure from damage or interference caused by blockades, protests or similar activities, which can cause significant public safety, social, economic and environmental consequences.” The phrasing is vague about what counts as “essential infrastructure” – that’s up to the provincial cabinet to decide, whether it be pipeline projects or highways or roads.

Under the terms of the bill, those exercising our constitutional rights could face hefty costs and jail time. The minimum fine for the offence of mere presence on public land is $1,000, with a maximum fine for a first offence at $10,000 and up to $25,000, as well as up to six months in prison, for subsequent “offences.” So even as people protest against discriminatory laws, this sweeping legislation aims to codify discriminatory punishment in the name of “lawful” business.

This is what you get when you vote for Cons.

Now … let’s be concerned about anyone that embraces this kind of reaction to freedom of expression. The right to protest is one of the few tools we have in our kit that help us draw attention to disgusting waste and infringements on people’s rights in general. Trump has already labeled protesters with a broad label of ‘Antifa’ which has also been labeled with the ‘terrorist’ tag. As these kind of labels increase, so too do the fines, restrictions and limitations on our rights. 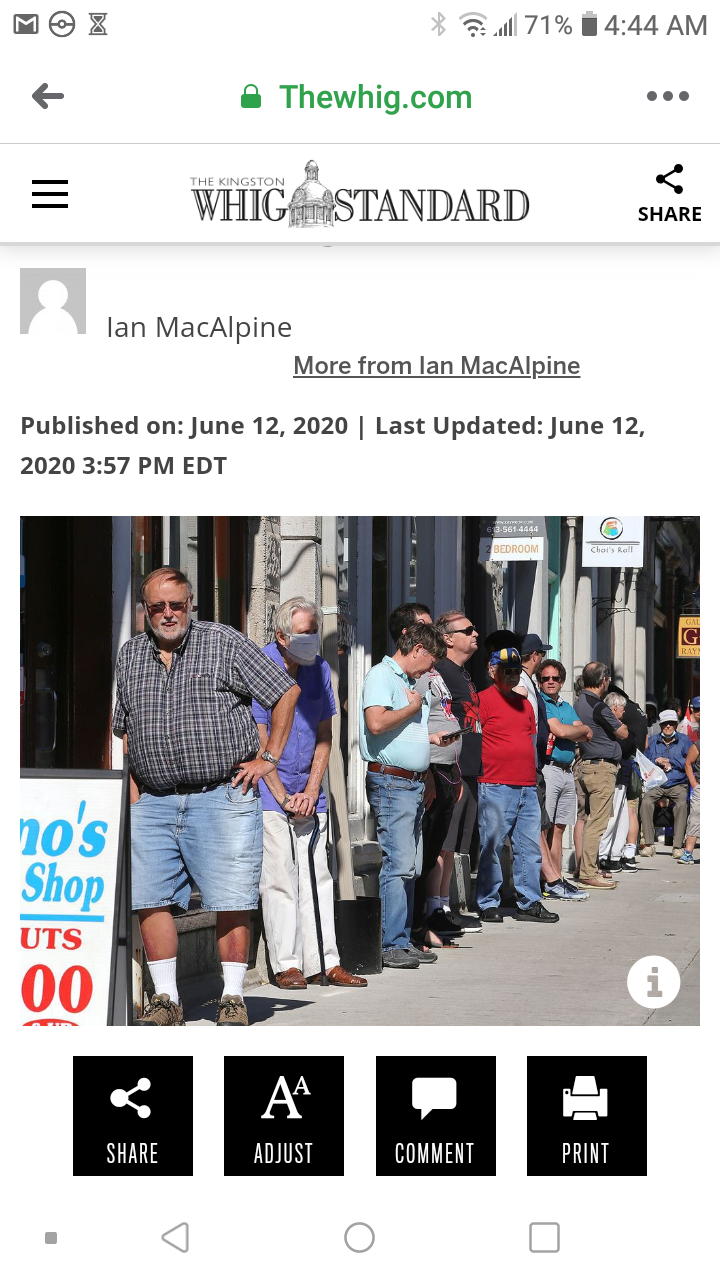 It’s hard not to stereotype, but a picture is certainly worth a thousand words. Most of the shopping I’ve done involves dodging around old white men that seem to think they’re immune from Covid.

I’m keen to hear your feedback and prove me wrong with this. Maybe the area where I live is just dominated by this demographic?

Companies Using Covid As A Shield For Destruction Of The Planet

Oops … Rio Tinto destroyed a series of aboriginal caves that date back 46,000 years.

The Juukan Gorge caves, in the Pilbara region, were destroyed last Sunday as Rio Tinto expanded an iron ore project agreed with the authorities.

Many prehistoric artefacts have been found at the remote heritage site.

“We are sorry for the distress we have caused,” said Chris Salisbury, the firm’s iron ore chief executive.

“We pay our respects to the Puutu Kunti Kurrama and Pinikura People (PKKP),” he said. The PKKP are the traditional owners of the site.

“We will continue to work with the PKKP to learn from what has taken place and strengthen our partnership. As a matter of urgency, we are reviewing the plans of all other sites in the Juukan Gorge area.”

In other news, the Trump Administration has eased rules that would normally protect up to 1,000 different specied of birds throughout the United States.

More than 1,000 species are covered under the law, and the changes have drawn a sharp backlash from organizations representing an estimated 46 million U.S. birdwatchers.

The study did not put a number on how many more birds could die but said some vulnerable species could decline to the point where they would require protection under the Endangered Species Act.

Former U.S. Fish and Wildlife Service Director Dan Ashe and independent scientists have said the change could could cause a huge spike in bird deaths — potentially billions of birds in coming decades — at a time when species across North America already are in steep decline.

The proposal would end the government’s decades-long practice of treating accidental bird deaths caused by industry as potential criminal violations under the Migratory Bird Treaty Act.

For all those folks that whine about windmills killing birds, there’s no greater killer of species than lack of protection, especially for habitats.

It’s exhausting when you look at how this kind of buffoonery continues when the world knows better than to destroy our environment and ecology.