Just a small glimpse of the ‘we’re not racist’ FluKluxKlan truck rally descending on Ottawa over the course of this weekend.

Erin the Tool has promised to meet with ‘leaders’ and organizers of the rally and anti-vaxx protest, confirming his alignment is to right-wing WEXITeers and Yellow Vest, 2.0 as opposed to about 90% of (a) truckers and (b) Canadians in general that have committed to some form of Covid vaccine.

He’s joining the ranks of Andrew Scheer and Maxine Bernier, both of whom saw their political careers shoved to the sidelines, like piles of snow plowed after a storm.

Erin the Tool has also joined a VERY small handful of folks who want to blame Trudeau and his government’s support of a vaccine mandate for all supply issues THAT ARE HAPPENING AROUND THE WORLD. It’s when that kind of accusation gets tossed around that I wonder WTF any Conservative supporter is thinking when their leadership makes these statements.

And this just in from Kingston Police, who reported on the volume of vehicles as the ‘convoy’ approached along the 401: 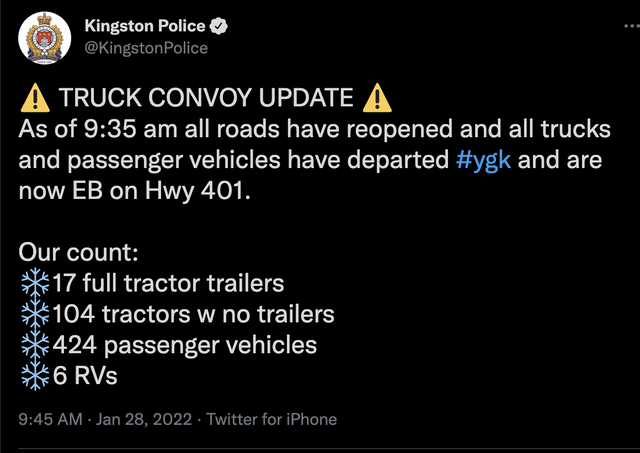 It’s sad, really, that the CBC is our public broadcaster and they continue to air full and front-page billing to the ‘con-convoy’.

Here’s the reality of the situation:

Last but not least, there’s been millions raised via Go Fund Me. Will this fundraising site be held liable if anything happens to Canada’s capital over the weekend? If violence breaks out, can we please hold that company responsible, as they’ve been accepting millions, much of it from unknown and anonymous sources?

Maybe it’s American truckers who can’t get back into the US because of, you know, a little thing called the AMERICAN MANDATE that Canada is simply trying to comply with.

THANK YOU vaccinated truckers that continue to do your job and contribute to society.

THANK YOU to the Canadian Trucking Alliance for denouncing this protest.

THANK YOU sensible Canadians for being patient and engaging in the social contract of doing your best to protect your fellow citizen.