A Balanced Budget Isn’t A ‘Left’ or ‘Right’ Thing

Individuals, regardless of political bent, rarely incur deficits in their home on an annual basis.

These days, it seems someone’s life is measured by how well they’ve managed to control their financial impulses, regardless of what political stripe they wear.

We all have to make choices, some painful and awkward, that send us on the proper path towards financial independence.  To fail in this means surrendering our lives to bankers, pay-day loan companies and credit card usury.

Which makes the whole discussion about deficits in Canada at the federal level very confusing for the average Canadian.

Stephen Harper hasn’t been able to create a surplus in nearly all the years that he’s run Canada and yet claims he’s the only one capable of running the country from a sound fiscal perspective.  This is like claiming it’s OK to run to the credit card company to finance your mortgage.

Under Stephen Harper the fiscal deficit has EXPLODED and he’s asking us to allow him to continue?

(And white-collar rich and old white men that should know better continue to believe this horse shit?)

Justin Trudeau says it’s OK to run up deficits in the wake of the election because, well, we may have to.  The only ‘positive’ legacy the Liberals have are the years when Paul Martin was finance minister and Canada had half a chance of emerging from the financial restraints imposed by mafia-like organizations like the Moody’s or Dominion Bond Rating Service.

Tom Mulcair and the NDP are the only main party promising to control themselves when elected to office and maintain a balanced budget.  If you don’t believe the promise, look to the records of provincial NDP management:

Let the numbers speak for themselves …

I won’t bore you with my own bias.  Let’s let the numbers speak for themselves: 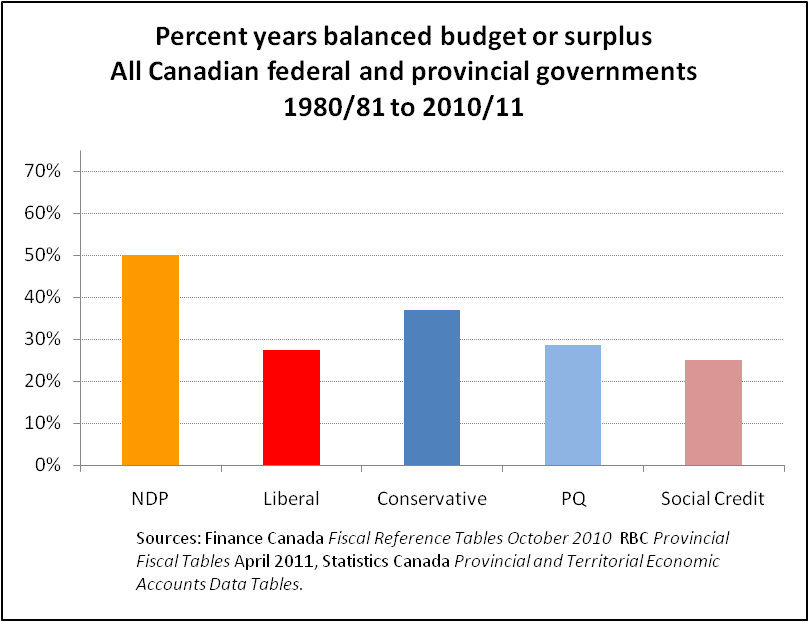 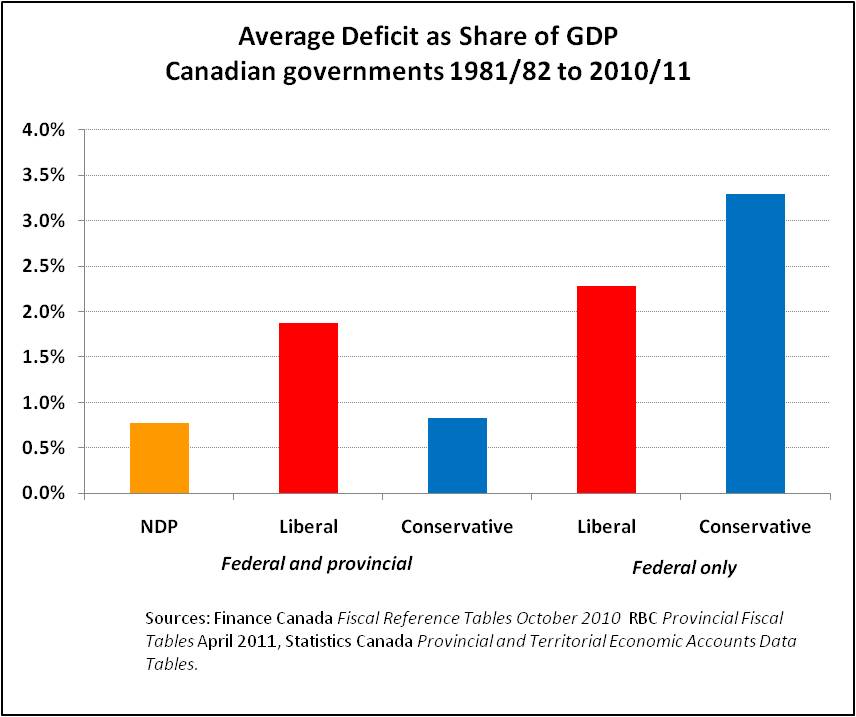 I personally believe that every financial house should be in order.  We should encourage saving, reward investment in our community and our peers and grow from our own pool of financial resources.

It must start at the federal level and the federal government needs to HELP all other levels of government and even households get their budgets in order.  But they MUST END passing the buck to lower levels that are not in a position to finance projects and services for all Canadians like the Harper government has for the last decade.

We can’t afford it.

Ultimately, those in charge of the federal budget should be able to balance the budget any time, regardless of the market circumstance, by making sure they ‘pull the right levers’ and make prudent investment choices with the money provided by hard working Canadians.

Balancing a 2015/2016 budget will be quite easy when you consider the Harper giveaways to the rich and elite in this country:

See, a balanced budget is just about setting different priorities and attacking those expenses or programs that make no sense to the AVERAGE Canadian.

Do you want a Canada that only looks out for the 1% or one that balances support for all industries with support for individuals?

Do you want a Canada that supports all individuals, regardless of their ‘status’ as a Canadian, be it rich, poor, etc?

When politicians get into fisticuffs about who can run up the bigger deficit, just ask them what largesse Stephen Harper has created and how quickly they’ll be able to take it down.