I admit I’ve been hiding under a reock of sorts during the US election held this past week.

I was glued to the various news feeds while also yelling at the radio and TV, embarrassed for the various journalists that continue to pretend that there’s ANY truth to what Trump says.

Anyways, I’m back and I wanted to share a concession speech that we all need:

My friends, we have come to the end of a long journey. The American people have spoken, and they have spoken clearly. A little while ago, I had the honor of calling Sen. Barack Obama — to congratulate him on being elected the next president of the country that we both love.

In a contest as long and difficult as this campaign has been, his success alone commands my respect for his ability and perseverance. But that he managed to do so by inspiring the hopes of so many millions of Americans, who had once wrongly believed that they had little at stake or little influence in the election of an American president, is something I deeply admire and commend him for achieving.

This is an historic election, and I recognize the special significance it has for African-Americans and for the special pride that must be theirs tonight.

I’ve always believed that America offers opportunities to all who have the industry and will to seize it. Sen. Obama believes that, too. But we both recognize that though we have come a long way from the old injustices that once stained our nation’s reputation and denied some Americans the full blessings of American citizenship, the memory of them still had the power to wound.

A century ago, President Theodore Roosevelt’s invitation of Booker T. Washington to visit — to dine at the White House — was taken as an outrage in many quarters. America today is a world away from the cruel and prideful bigotry of that time. There is no better evidence of this than the election of an African-American to the presidency of the United States. Let there be no reason now for any American to fail to cherish their citizenship in this, the greatest nation on Earth.

Sen. Obama has achieved a great thing for himself and for his country. I applaud him for it, and offer my sincere sympathy that his beloved grandmother did not live to see this day — though our faith assures us she is at rest in the presence of her Creator and so very proud of the good man she helped raise.

Sen. Obama and I have had and argued our differences, and he has prevailed. No doubt many of those differences remain. These are difficult times for our country, and I pledge to him tonight to do all in my power to help him lead us through the many challenges we face.

I urge all Americans who supported me to join me in not just congratulating him, but offering our next president our goodwill and earnest effort to find ways to come together, to find the necessary compromises, to bridge our differences and help restore our prosperity, defend our security in a dangerous world, and leave our children and grandchildren a stronger, better country than we inherited.

Whatever our differences, we are fellow Americans. And please believe me when I say no association has ever meant more to me than that.

It is natural tonight to feel some disappointment, but tomorrow we must move beyond it and work together to get our country moving again. We fought — we fought as hard as we could.

And though we fell short, the failure is mine, not yours.

I am so deeply grateful to all of you for the great honor of your support and for all you have done for me. I wish the outcome had been different, my friends. The road was a difficult one from the outset. But your support and friendship never wavered. I cannot adequately express how deeply indebted I am to you.

I am especially grateful to my wife, Cindy, my children, my dear mother and all my family and to the many old and dear friends who have stood by my side through the many ups and downs of this long campaign. I have always been a fortunate man, and never more so for the love and encouragement you have given me.

You know, campaigns are often harder on a candidate’s family than on the candidate, and that’s been true in this campaign. All I can offer in compensation is my love and gratitude, and the promise of more peaceful years ahead.

I am also, of course, very thankful to Gov. Sarah Palin, one of the best campaigners I have ever seen and an impressive new voice in our party for reform and the principles that have always been our greatest strength. Her husband, Todd, and their five beautiful children, with their tireless dedication to our cause, and the courage and grace they showed in the rough-and-tumble of a presidential campaign. We can all look forward with great interest to her future service to Alaska, the Republican Party and our country.

To all my campaign comrades, from Rick Davis and Steve Schmidt and Mark Salter, to every last volunteer who fought so hard and valiantly month after month in what at times seemed to be the most challenged campaign in modern times — thank you so much. A lost election will never mean more to me than the privilege of your faith and friendship.

I don’t know what more we could have done to try to win this election. I’ll leave that to others to determine. Every candidate makes mistakes, and I’m sure I made my share of them. But I won’t spend a moment of the future regretting what might have been.

This campaign was and will remain the great honor of my life. And my heart is filled with nothing but gratitude for the experience and to the American people for giving me a fair hearing before deciding that Sen. Obama and my old friend, Sen. Joe Biden, should have the honor of leading us for the next four years.

I would not be an American worthy of the name, should I regret a fate that has allowed me the extraordinary privilege of serving this country for a half a century. Today, I was a candidate for the highest office in the country I love so much. And tonight, I remain her servant. That is blessing enough for anyone and I thank the people of Arizona for it.

Tonight — tonight, more than any night, I hold in my heart nothing but love for this country and for all its citizens, whether they supported me or Sen. Obama, I wish Godspeed to the man who was my former opponent and will be my president.

And I call on all Americans, as I have often in this campaign, to not despair of our present difficulties but to believe always in the promise and greatness of America, because nothing is inevitable here.

THIS is the speech that we all deserve to hear right now.

Mr. Human Garbage (aka #45) will be pushed into the archives of history as a bullet that the planet dodged, a madman that did so little for anyone but himself and yet did so much to incite racism, economic disparity and environmental disaster for the United States and the Earth on whole.

It’s unlikely that Trump will go away any time soon or easily, but his time has nonetheless passed and we can all breathe a collective sigh of relief.

However, his damage continues to have ripple effects throughout society and it will take a lot of effort, tenderness and civility to bring tensions to a peaceful end.

Years ago, Stephen Harper and many other politicians spoke of how populist politics and voters would never go away and preyed on the mindless fear of big government and taxes as being the root of all evil. Unfortunately, he’s right (in the sense that populism won’t die easily). Erin O’Toole continues with that blindness. However, we can do everything in our power to evoke logic, humanity and collective will to bring about real change that we and many future generations can benefit from.

The US Election – Looking at the Data

When you look at an interactive map of the voting results, the nation of America shows a fairly clear split: Democrats on the east and west coasts and Republicans through the middle. See below … (note: the screengrab was taken a few days ago): 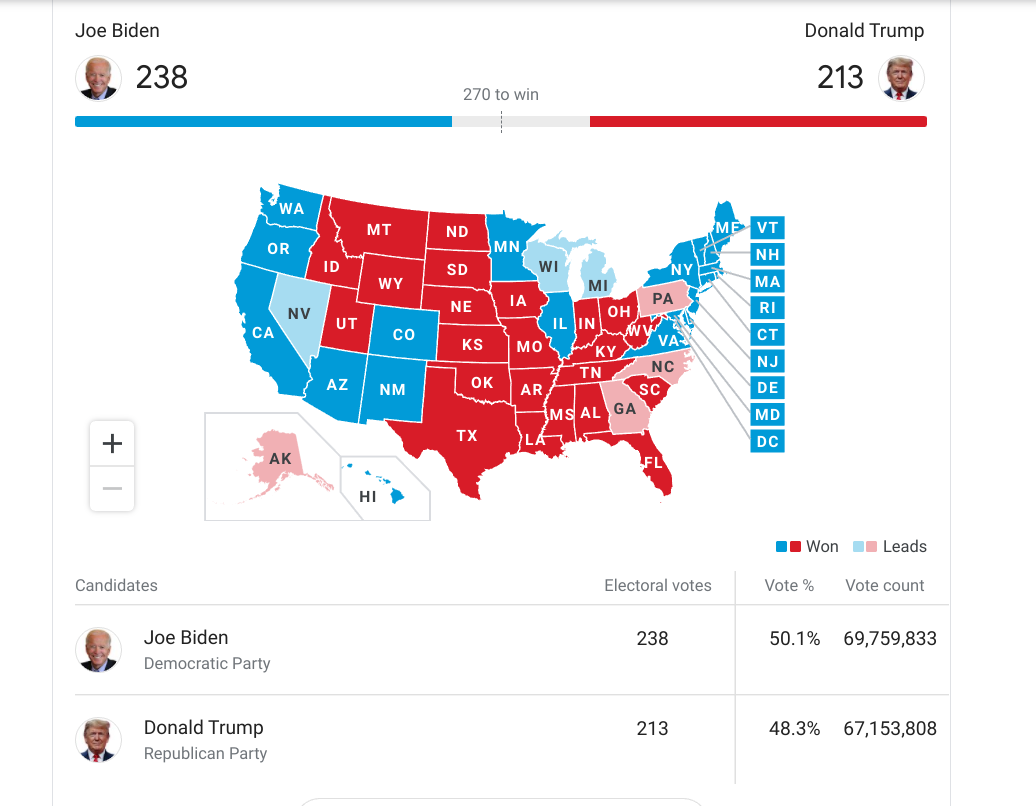 Right away, it’s easy to suggest that population density drives progressive attitudes. It’s not a universal truth, but there’s a lot to be said for this when you look at the situation on a state-by-state basis. The split between ‘city slickers’ and ‘bumpkins’ is plain as day: 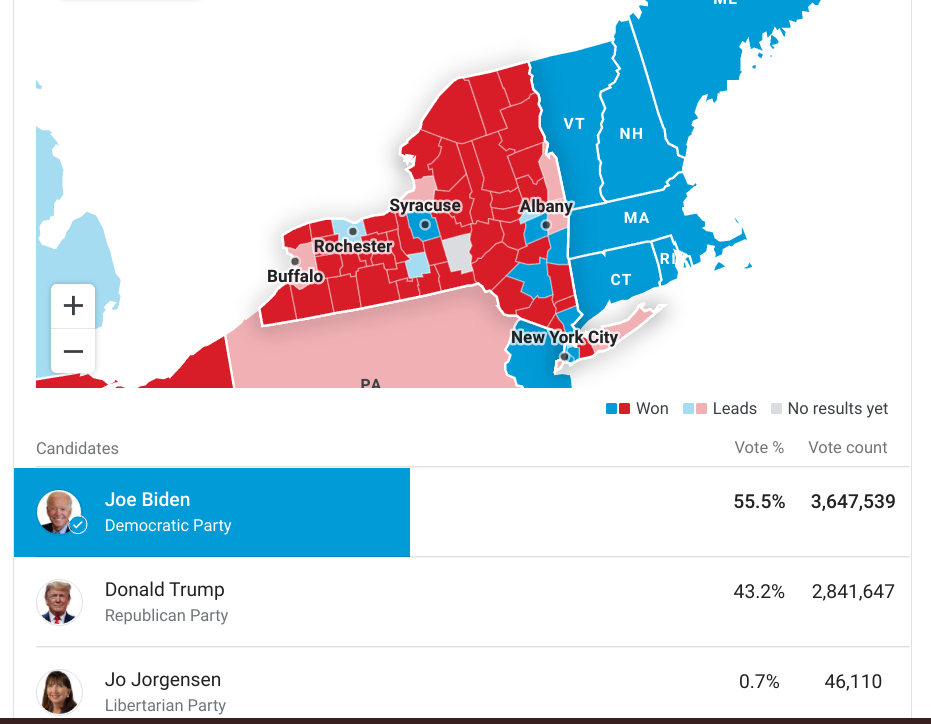 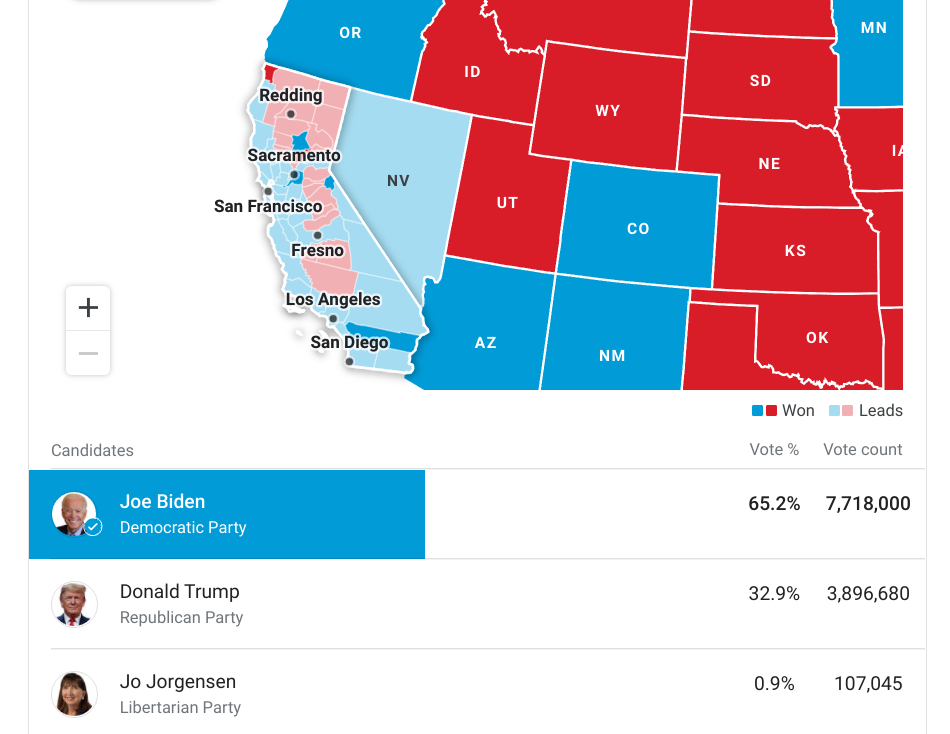 New York and California are the ‘go to’ states for Democrat results and yet, they show how rural areas are VERY red (California much less so) compared to urban areas. Obviously, most other states show even more extreme contrasts.

As Americans try to move forward, analysts, journalists, educators and others need to do a serious and hard look at why the divide between rural and urban voters is so wide.

Canada needs to do the same thing, ideally before our next election as I would be happy to see the Conservatives NEVER return to power.

The Ontario government under Doug Ford and Stephen Lecce have pushed forward with a destructive attitude about public education that continues to reverberate through the halls of elementary and secondary schools.

The allowance of so many different systems of delivering education over the last 3 months will lead to disaster and, more importantly, a future generation hating all of us who let it happen on our watch.

The CBC showcased a series of different experiences from students across the planet and the scenarios aren’t pretty, even though they cherry-pick from the most successful collections of kids pushing through school.

The United Nations declared that access to a reasonable and effective public education is a fundamental right.