It has been another overwhelming week in our world. Thankfully, we seem to be once again making progress against Covid – vaccinations up, cases and deaths down, places reopening, people gathering again – but sadly, as we recover from one pandemic, another – human cruelty and stupidity – runs rampant.

While I’ll continue to title my blog entries as ‘Covid Journal’, I’m hopeful that this will be a thing of the past … soon.

A twenty-year old man ended an entire family yesterday in what is now viewed as a premeditated hate-driven attack.

Four counts of murder and one count of attempted murder have been charged by local police.

The only reason ‘terrorism’ is used to describe this disgusting act is because the local police have suggested they might lay down terrorism charges:

“There is evidence that this was a planned, premeditated act and that the family was targeted because of their Muslim faith,” said Waight.

If the tables were turned, we most certainly would be hearing the ‘terrorist’ word more.

The crimes committed by the Catholic church are universal, with this song brought to us by the people of Australia.

The ‘discovery’ of 215 bodies of children last week only amplify the urgent need for Canada to quickly find resolution to the problems that our churches and governments have created.

People across Canada and the globe are grappling with how to respond to these murders.

The Truth and Reconciliation findings, conclusions and recommendations are a vital first step. They’ve been laid out plain to see, but our governments continue to side-step their wisdom.

Please make yourself familiar with these recommendations. There are 94 in total and all are very reasonable given the atrocities committed against Canada’s First Nations peoples.

Reporting on the issue continues to pour in across Canada, with some organizations such as the National Farmers Union committing to ‘decolonization’.

I grow weary of people – including our Prime Minister – saying ‘I’m Catholic and I’m appalled’.

Hit them where it hurts.

Stop being a Catholic and stop supporting a religion that has failed miserably in its basic intent to protect the weak and respect people who are ‘different’.

And Justin: STOP trying to hide your attack on Indigenous children.

Canada Continues To Allow The Destruction Of Our Legacy

The Canadian legacy is and should be unique landscapes and ancient groves of trees, unspoiled parks and wildlife areas that aren’t found anywhere else in the world.

And we’re destroying them as quickly as we can. Certainly faster than they can grow back.

This picture is making the rounds with social media and hasn’t quite infiltrated the news yet: 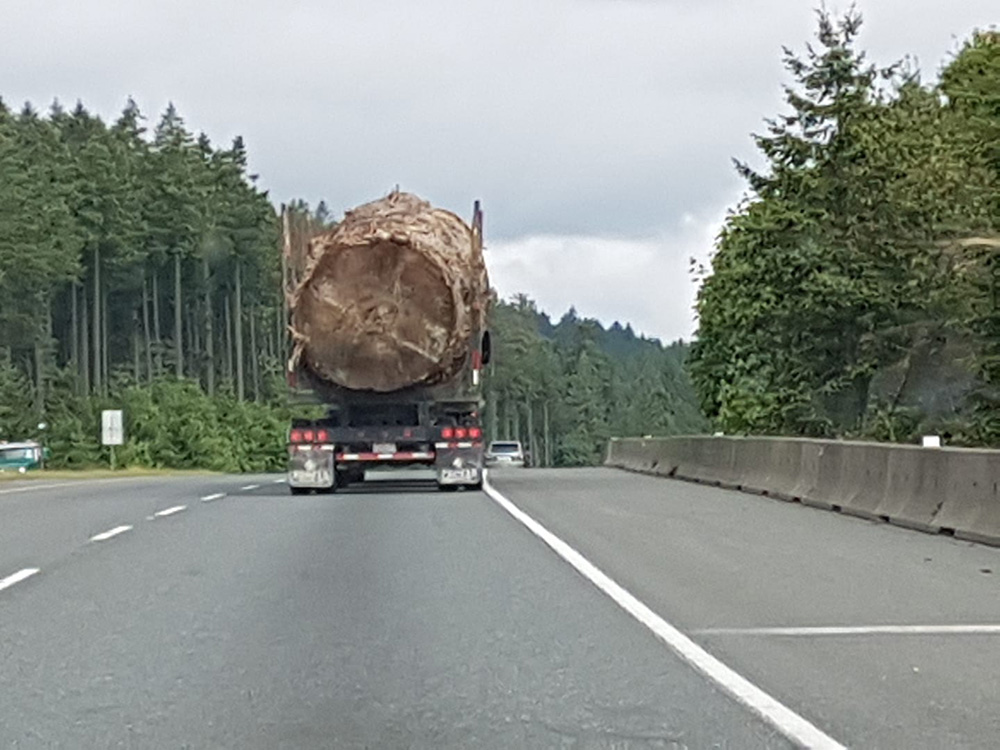 Lorna Beecroft had snapped the picture when driving along the Nanaimo Parkway. The Tyee tried to find out where it was destined. Speculation has it that it was bound for Hong Kong or China, but it seems like it might have been a BC-based company that makes guitar sound boards. Ugh.

While the BC government is suggesting that whoever cut the tree might be fined, we’re also seeing that the logging grounds are being protected by the RCMP.

Thankfully, one Indigenous group – the Gitxsan – have declared that their territory is off-limits to clear-cut logging of old-growth forests. The province of BC has told them to remove their gate. They have so far been able to refuse these demands.

The repeat my thoughts about finding a way to identify ourselves and our legacy:

Art Wilson remembers working with his grandfather to selectively log cedar here using a team of horses. Even further back, Gitxsan would traditionally peel a single plank from a tree, leaving the rest to continue growing. The area is full of trees scarred from past use, known as culturally modified trees.

“The beauty of this territory here is cedar,” Wilson says. Not only is the tree considered spiritually important, but it was used for necessities like canoes, bent boxes, baskets and clothing, he explains.

Wilson’s words are drowned out by the clatter of a flatbed hauling machinery down the nearby Date Creek main road.

Unfortunately, another group – the Pacheedaht First Nation – seems to support the logging of old-growth in places like Fairy Creek, but confilcting stories indicate that they’ve also asked for a deferral.

Horgan refuses to interfere or ask them to stop selling their lands to logging companies, claiming he doesn’t want to appear as an interventionist.

To stay informed about the issue and status of logging in Fairy Creek, please consider signing up for The Discourse, a newsletter provided by local activists.