I’m a little embarrassed that I missed the opportunity to acknowledge National Indigenous People’s Day (June 21).

I don’t know how to acknowledge the hardships and challenges that all First Nations people face, but I am committed to at least not getting in the way as Canada’s Indigenous people find solutions.

Conservatives: Doubling Down on Disappointing

Erin O’Toole is really going all out to prove that he should be replaced.

The list of bad ideas, poor policies and more is VERY long, but recently his statement about Canada Day cancellations in various cities and trying to blame Justin Trudeau for people simply trying to show respect for First Nations people is just asinine.

O’Toole sought to link the municipal cancellations to Prime Minister Justin Trudeau. He accused the Liberal government of standing by silently while some cities do away with planned celebrations. “Who is asking Canadians whether they want Canada Day to be cancelled?” O’Toole said.

Victoria’s city council voted unanimously to suspend Canada Day festivities this year, citing the Kamloops discovery. The city’s mayor, Lisa Helps, said some First Nations peoples are too grief-stricken to participate and a planned virtual gathering will be scrapped.

How could O’Toole be so obtuse about this?

I know he’s an easy target, but just HOW is Justin Trudeau to blame for independent thoughts coming from municipal leaders across the country? Did he personally call every councilor in Victoria to implore them to cancel Canada Day events?

Maybe it’s a grand conspiracy, like the one big coverup that they think is happening with Iain Stewart. What’s the Conservative source on the grand scheme to pin the Covid blame on Justin Trudeau (again)? Epoch Times? Maybe Zoltar the magical fortune telling machine?

There’s little doubt that there’s something worth investigating – as in all things related to Covid but do you really think Justin Trudeau and a handful of Liberals are responsible for a planet-stopping pandemic?

As a reminder, Bill C-6 criminalizes conversion therapy, the abhorrent practice of ramming religion and ‘straightness’ down the throats of those whose lives aren’t the ‘traditiona old stock Canadian hetero lifestyle’. 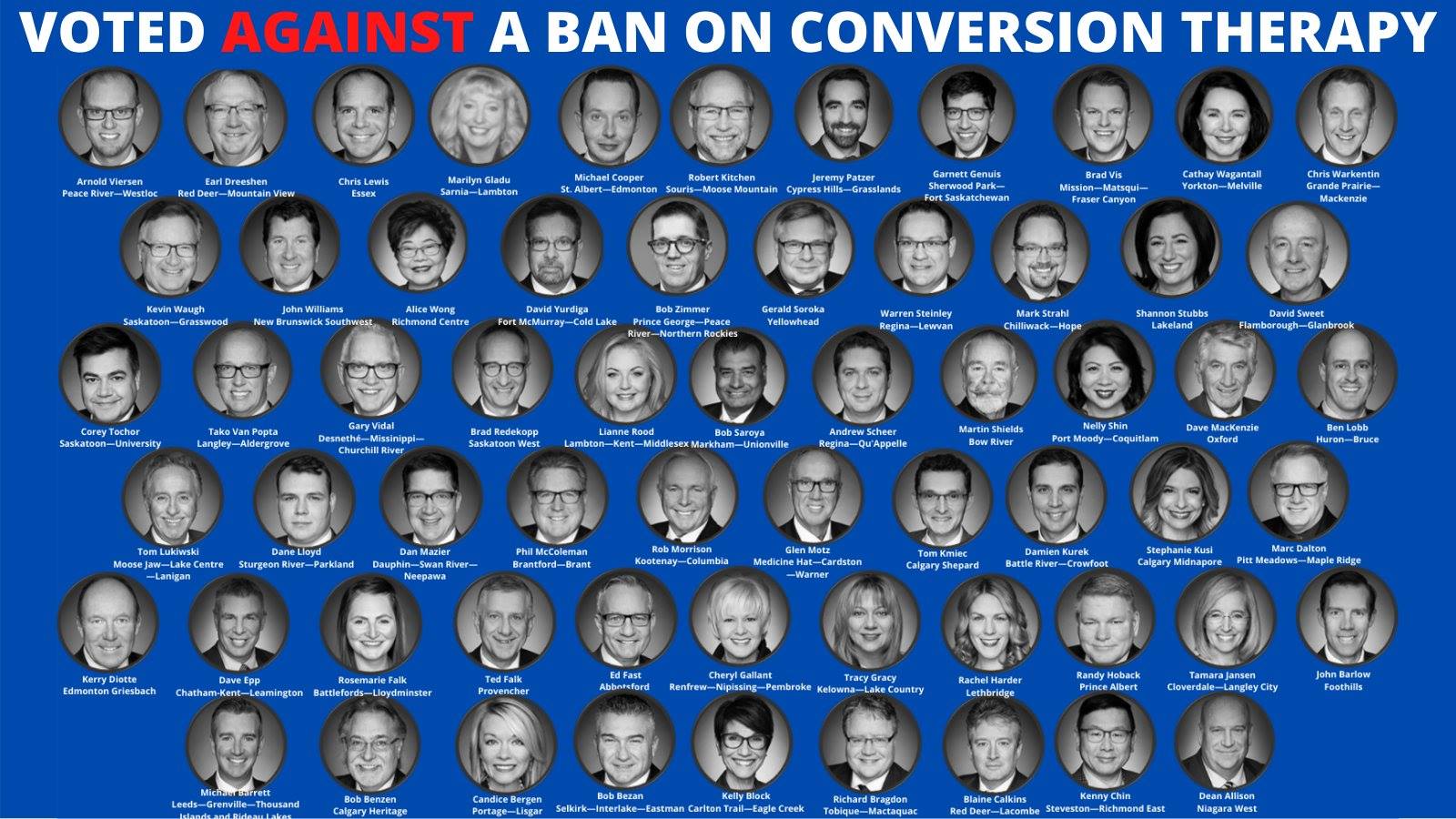 Conservatives work very hard to tell Canadians that they won’t be a ‘Trojan Horse’ to other long-retired issues like gay rights, women’s rights, abortion and so on, but we see from the picture above that all the leader of the opposition needs is a majority of backwards-thinking politicians to keep agendas alive and well.

And basic human rights deeply entrenched in the middle ages.

Fabricating the Next Trillion-Dollar Budget Requirement

We’re running out of villians.

It’s no longer acceptable to turn ‘people not like us’ into villains (human history is loaded with conflicts arising from the array of simple differences that exist among us), so the last few years have been all about a virus that we can’t control.

Next on deck: UFOs.

That’s right. A different kind of alien invader is going to take the place of ‘illegal’ immigrants and refugees coming to disrupt our way of life.

Later tomorrow, the US government is poised to announce whether recent videos are recordings of ‘unidentified flying objects’ that are not of terrestrial design.

It’s the perfect setup, really. Trillions of dollars will be added to the massive piles of money already spent on greedy companies like Boeing, Lockheed-Martin, SpaceX and others trying to find ‘life out there’.

And defeating the ‘new terrorist’.

I’m sure that if we’re not adding to pile of money to be burned, we’ll be labeled as ‘not wanting to save humanity’ from the potential onslaught of ‘little green men’.

That also won’t stop people on this planet from trying to find ways to incinerate the whole damn place so there’s nothing of value for any visitors anyhow.