This post will start with another eye-rolling ‘I’m not an expert’ statement, but like Seinfeld, I can at least apply what I DO know and will speak to the absurdities that I’m witnessing.

We are being lead by developers and politicians that profoundly believe the expression “if you build it they will come“.

People like Doug Ford and now Chrystia Freeland et al firmly believe that plowing everything over, increasing density and being very liberal with permits will help make housing more affordable and abundant, therefore stemming the price increases we’ve been witness to over the last four decades.

FFS, people are laughing and mocking Canada by comparing house prices in LA to Orillia. The quote being: 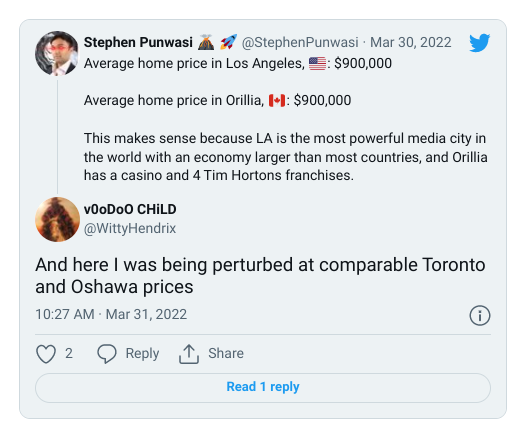 Housing prices will continue to escalate. Not because every Joe and Jane in Canada are clamouring for a house – but this is part of the problem – but because of external factors that are artifically inflating the market (this is where I actually AM an expert, being trained as an economist), including the following:

(As a side-note on vacant property. If we were serious about this, we’d have a simple rule: you’ve got 24 months to make something of this property. If you don’t use it for city-approved purposes (ie. rentals, business activities), you’ll be subject to a massive property tax payable immediately and not eligible for deduction as a cost of doing business. If property owners bail, we take possession of the building and assets and convert them to productive assets that our cities need. Example: food terminals, growing facilities, distribution centres, etc).

No amount of supply will reduce rents and stifle our exploding market.

All we’re going to do is destroy productive farm land and natural environments as well as line the pockets of developers everywhere across Canada.